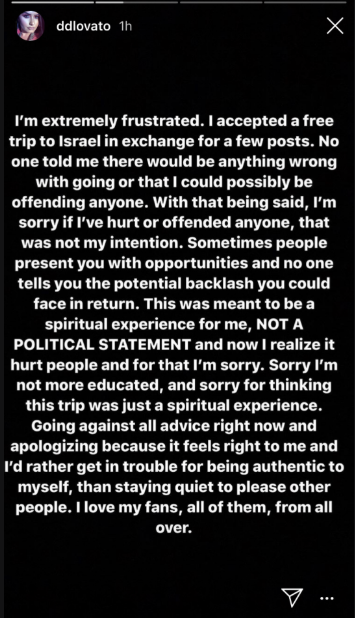 Singer-Actress Demi Lovato got a free trip to Israel, apparently sponsored by Zeev Elkin of Israel’s Ministry of Foreign Affairs. All she had to do was write a few posts.

While she was in Israel, she got baptized in the Jordan River and had a religious experience. She posted about that.

I am an American singer. I was raised Christian and have Jewish ancestors. When I was offered an amazing opportunity to visit the places I’d read about in the Bible growing up, I said yes. There is something absolutely magical about Israel. I’ve never felt such a sense of spirituality or connection to God…something I’ve been missing for a few years now. Spirituality is so important to me…to be baptized in the Jordan river – the same place Jesus was baptized – I’ve never felt more renewed in my life. This trip has been so important for my well-being, my heart, and my soul. I’m grateful for the memories made and the opportunity to be able to fill the God-sized hole in my heart. Thank you for having me, Israel 💗

But ultimately, she folded in response to an avalanche of criticism. Because that is what always happens when a celebrity goes to Israel: the haters begin to flood them with anti-Israel tweets and messages. So why do I say she folded? Because Demi Lovato gave in to the hate, in spite of what she saw about Israel when she was there: that it is a good and democratic nation. How did she give in?

She apologized. The apology is for believing good things about Israel, about taking something, anything from the Jewish State, from the Jews.

Now when Jennifer Lopez came to Israel, she didn’t give in. She didn’t apologize. Demi Lovato’s own mother refused to apologize for visiting Israel. But apparently, Lovato just goes with the breeze, which in this case, meant going with the haters.

Not that anyone really cares what a singer-actress thinks or believes.