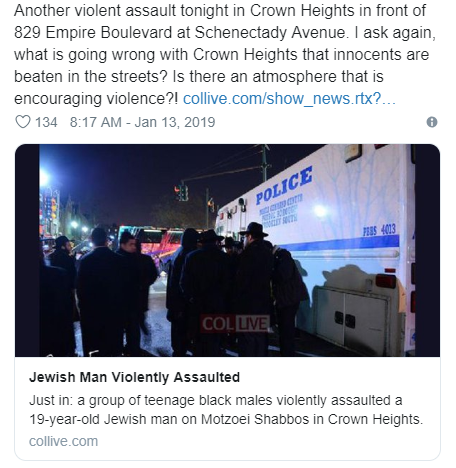 According to Algemeiner, “More than 160 antisemitic hate crimes were documented by the NYPD in 2018, an increase of almost 25 percent over the previous year,” and now there’s been another attack on a Jewish man, this time on a Saturday night in Brooklyn’s Crown Heights. (I leave it to you to consider: is 19 years-old a man or a mere boy?)

Another violent assault tonight in Crown Heights in front of 829 Empire Boulevard at Schenectady Avenue. I ask again, what is going wrong with Crown Heights that innocents are beaten in the streets? Is there an atmosphere that is encouraging violence?! https://t.co/zgdArRqmtE

Are things really worse, or are we just hearing more about antisemitism and antisemitic attacks these days in the wake of Charlie Hebdo, the rise of Jeremy Corbyn, and the Pittsburgh Synagogue Pogrom?

If antisemitism really is increasing, and it’s not just the media suddenly deciding to cover these stories, are we headed for another Holocaust, God forbid? What is the solution to antisemitism? How do we stop it in its tracks?