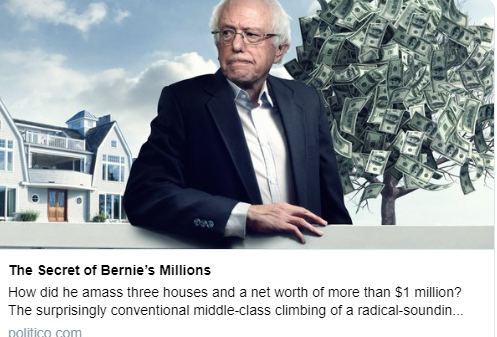 Alexandra Ocasio-Cortez is complaining that no one complains when antisemites on the right are acting out. The cause of her complaint? An article in Politico that showed Bernie Sanders next to a money tree. The article’s purpose is apparently to ponder how a poor Democratic socialist ended up with a net worth of at least $2m.

Bernie Sanders has three homes and a net worth approaching at least $2 million.
In a strict, bottom-line sense, he has become one of those rich people against whom he has so unrelentingly railed.https://t.co/PawDq3S07m

There appears to be no specific anti-Jewish sentiment intended by the image. Sanders just happens to be both Jewish and rich. The implication of the image is that for Sanders, money grows on trees. That’s NOT an antisemitic trope.

Perhaps the real antisemitism here is AOC making the connection in her head: the only people who get rich easy are Jews.