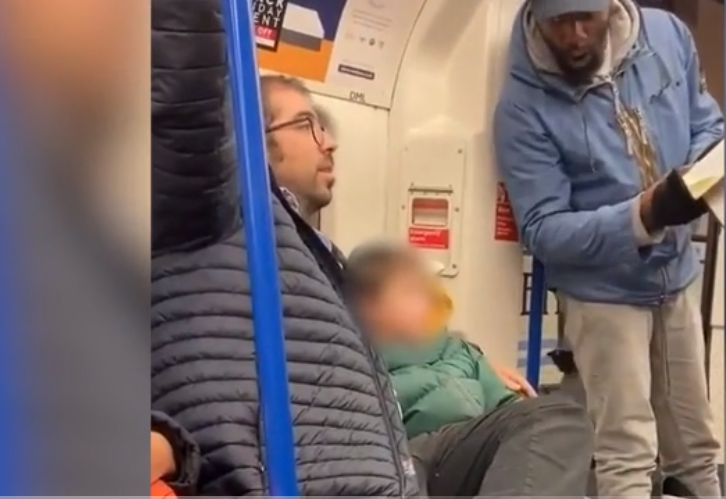 A Jewish family was subjected to an antisemitic harangue as they traveled on the tube (subway). As he attempted to keep his children calm, a Muslim woman confronted the abuser. The whole thing was captured for posterity by a quick-thinking bystander with a phone, of course.

Her name is Asma and in a statement given to IlmFeed she said, “…as a Muslim woman and mother I know what it’s like to be attacked and dehumanised for my faith and I couldn’t just watch and see this happen to another family with young children.” https://t.co/3bUrVdVHFz pic.twitter.com/x78p30xLmN

The Jewish man has since issued a statement regarding the event:

“On the morning of Friday 22nd November, my wife and I were sitting on the Tube travelling from Hendon Central to Covent Gardens minding our own business, discussing with our children our plans for the day.

“A man boarded the train after I did. As soon as he got on he came over and asked me if we were Jews. He shouted at me that the Jews started the slave trade and threatened that I, my wife and children were going to be his slaves and suffer various other ailments. He said the Jews were from the synagogue of Satan, and continued with vile antisemitic abuse which was very unsuitable for any child or adult to hear.

“I was confused. I was ready for the antisemitic comments after the Jewish question, but I was not prepared for the hail of antisemitic abuse which followed. The video only shows a short clip of fifteen- to twenty-minute ordeal.

“The only thing I could think about was the safety of my children and the best thing to do at that time was to restrain myself and try to get my children to ignore the situation. My wife and I tried to constantly reassure the children and distract them so they would not sense how anxious we actually were. We tried to remain calm and ignore the abuse, hoping this would keep our three young children calm.

“A man with a baseball cap bravely tried to intervene and he himself was subject to threats of violence. We are extremely grateful for the Muslim lady wearing the headscarf, who we now know as Asma, who stepped in. We are certain that without her intervention and distraction, he would have continued his abuse which could have escalated to physical violence. I would like to meet Asma in person to thank her.

“One cannot see on the short video that I politely asked him multiple times to step back and to stop directing abuse to my children. Afterwards, the gentleman filming very kindly switched seats with my son, and the lady who sat down next to me also helped distract our children by talking to them.

“The experience made me more vigilant on the journey home. My children were deeply worried and confused, but we are thankful that this incident only entailed verbal abuse and not worse. It is clear that antisemitism is still rife, it just happens that a small two minute snippet of this long episode was caught on camera.

“Shomrim North West London [a Jewish neighbourhood watch patrol group] have been supporting me and encouraged me to report this to Police, and to them I am very grateful.

“This Tube journey has left me with mixed feelings about society. On the one hand my wife, my children and I were subject to vile abuse in a full Tube carriage, however I am grateful for those who stood up for me.”