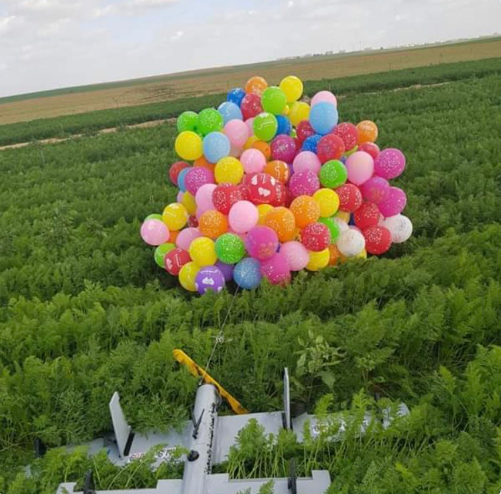 At the beginning of the pandemic, with everyone under lockdown, the balloons emanating from Gaza, with explosive devices attached, seemed to stop for a while. Now they’re back. A cluster of balloons with an attached IED (improvised explosive device) was discovered on Shabbos morning in a field near Kibbutz Nir Oz, along Israel’s southern border with Gaza.

Here is the improvised explosive device that was attached to the balloons:

Photo of the IED that was attached to a balloon launched from Gaza, that landed near Nir Oz this morning. pic.twitter.com/O7z11uNzvt

Luckily, no children were hurt this time, with the balloons neutralized by security forces before anyone could come to harm. But these balloons have caused millions of shekels worth of arson damage to crops and homes, and present an ever-present danger to Israeli children, who may be tempted by the colorful balloons and try to play with them. Jewish children, of course, are the main target of the terrorists who send these balloons over the border.

How sad a state of affairs we’ve come to that we need to warn children about balloons.